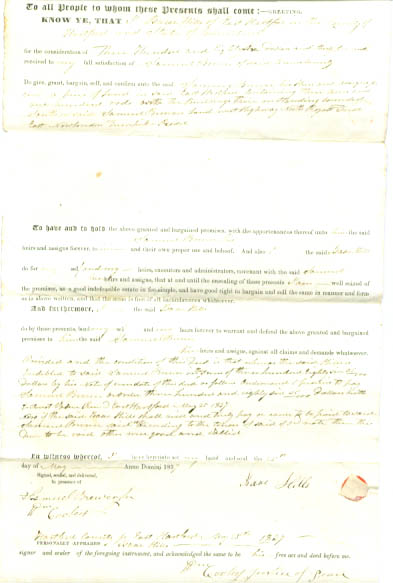 East Hartford, Connecticut deed. 3 acres and 100 rods land with buildings on land bounded by land owned by Samuel Brewer and Royall Treat and New London Turnpike. Witnesses Samuel Brewer Jr, William Cooley. JP Wm. Cooley. : Captain Samuel Brewer (1776-1847): one of the largest landowners in the town with holdings totaling some 3,000 acres in Hartford and East Hartford, much of it sold between 1830 and 1850. Established sizeable tobacco plantation in the Hockanum area and traded cigars in New York for dry goods and rum sold in his store in East Hartford. Served three terms as town selectman, four terms as state representative, and was one of five members of the building committee for the East Hartford Congregational Church erected at Church Corners in 1836. Original document. Signatories and interesting content noted. Scanner crops off a bit of the bottom. Folded as can be seen in the scan. Some foxing. Paper quite strong, not brittle. Very good or better; defects noted. If none noted, none present.